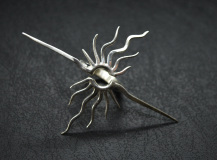 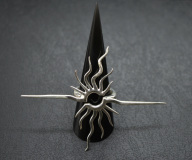 The New Zealand sun is not to be taken lightly. The sun is stronger in New Zealand due to three factors: pollutants released into the air from human activity has caused an expanding hole in the ozone layer, which often encompasses the country and protects less against uv rays. Another is there is less pollution around New Zealand which can help shield from the sun. The last is the sun's orbit takes the region closer to the sun during the southern summer months. A severe burn can happen in as little as 15 min even with sunscreen. SPF 50+ is widely available and encouraged.

This ring is inspired by the beautiful and life-giving but also deadly sun of New Zealand. It is cast in silver.